Hey Friends, let’s talk about Manmarziyan. Directed by Anurag Kashyap Manmarziyan is a comedy drama starring Tapsee Pannu, Abhishek bacchan & Vickey Kaushal in the lead roles. The film is written by Kanika Dhillon.
The plot of the film is very similar to the film Hum Dil de chuke sanam. It is a love triangle consisting of a sweet love story of Punjab. Director Anurag Kashyap has shown the love, marriage and betrayal in such a way that is very commonly seen in today’s world. The comic timing of the film is fantastic. The writer has beautifully compiled the dialogues with spontaneity.
Screenplay of the film is little weak and the movie is dragged big time. Maybe the situations shown in the film have been knitted in such a way that the audience might enjoy its slowness.
Cinematography of the film is good and camera makes us experience a small town of Punjab.
Dialogues play very strong part of the film that makes the film enjoyable.
Talking about the performances Tapsee Pannu is shining in the role of confident bold punjabi girl. Vickey Kaushal has proved to be very versatile actor after his serious role in the movie Raazi and then a Gujarati boy in the movie Sanju. Vicky is in the role of a Punjabi rapper. Abhishek Bacchan has delivered a very matured performance which is suiting his style.
Music is by Amit Trivedi and he has experimented giving the songs a different style.
Overall it is a good film, though very slow, still enjoyable. I give the credit to its director Anurag. It is a small neighbourhood story through which audience could connect. The title of the film Manmarziyan is matching with its concept.
My rating to Manmarziyan is 3 out of 5. Please subscribe to our channel for regular updates from us. Let’s meet next week with a new movie talk. Till then take care and stay blessed.

Movie Review of SUI DHAAGA – A Great Motivator for Entrepreneurs 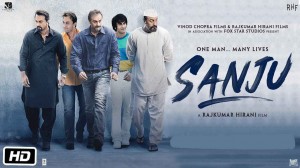